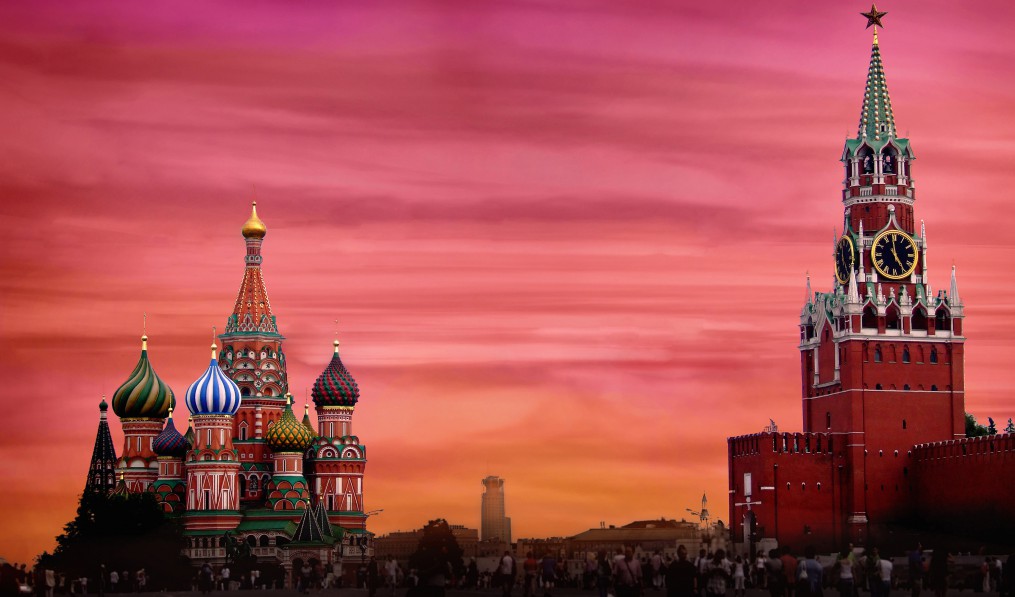 I saw many modern subway systems and can say that Moscow metro is really unique in its old and some new stations interior. Some useful information you can find here: Moscow metro and here: Wi-Fi in Moscow metro. If you love urban design and enough time I can advise you to see all stations inside the circle line and all stations on circle line itself, because they all absolutely different and interesting. But for this task you will spend at least one full day and will be very tired of crowds of people. By the way Moscow metro transports about 9 million people every day and it is 3 by this count in the world.

So below I want to describe some Moscow metro stations that is must to visit while you are in Moscow.

Opened in 1954 year. Named after Kievskiy train terminal which is situated nearby. In the hall we see 18 pylons, which are decorated with mosaics of glazes, decorated on the theme of the history of Ukraine and the friendship between the Ukrainian and Russian people. This station is the most reach for portraits on Stalin. You can reach Vnukovo airport by Aeroexpress from this station. 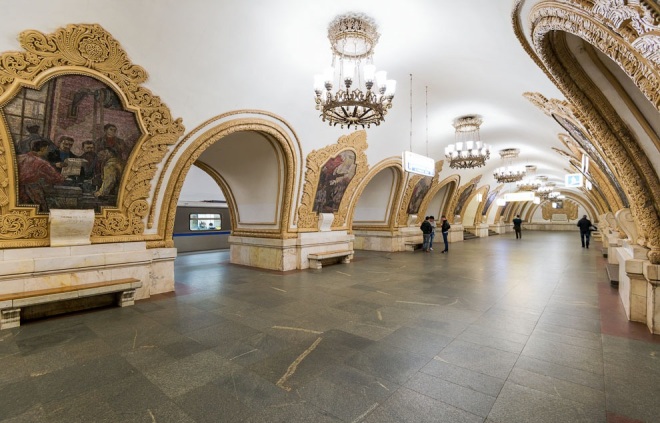 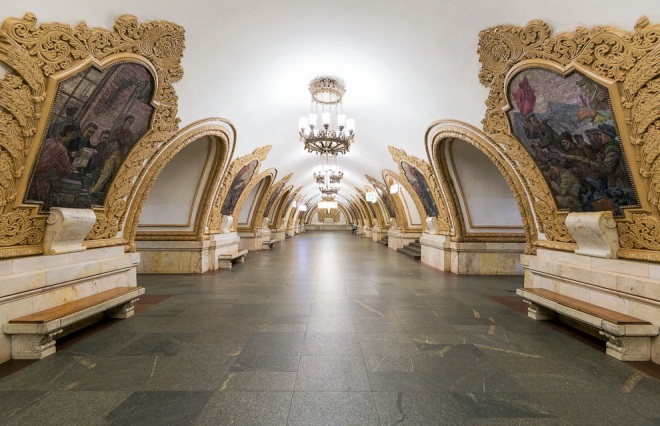 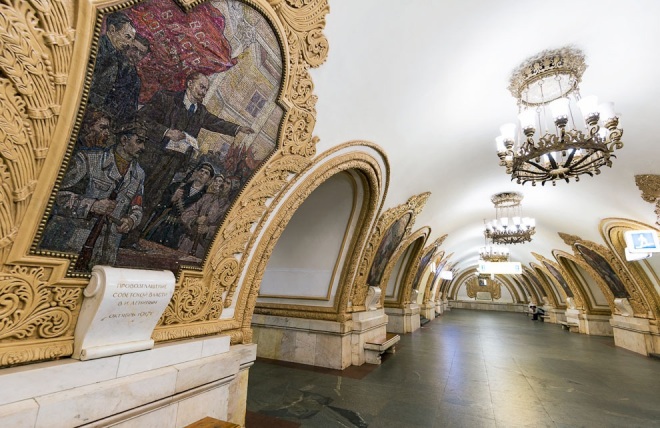 Opened in 1953 year. Decoration of station is devoted to union of Soviet Ukraine and Russia. Station is decorated with lots of beautiful paintings. On the vault of the pylons in the stucco medallions are placed frescoes depicting workers of Soviet Ukraine (“architect”, “Athletes”, “Energy”, “builders”, “Vegetable growers” and so on). You can reach Vnukovo airport by Aeroexpress from this station. 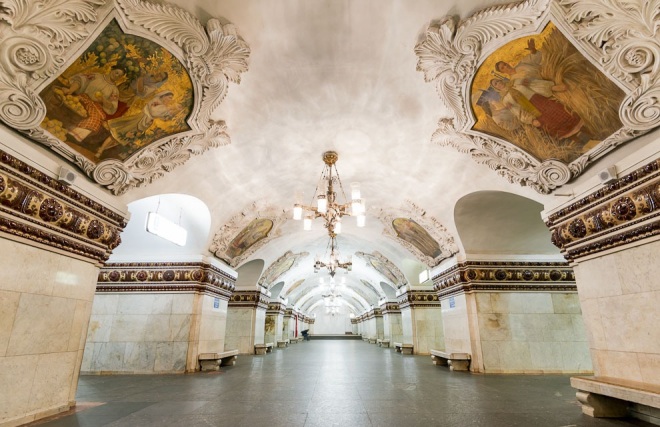 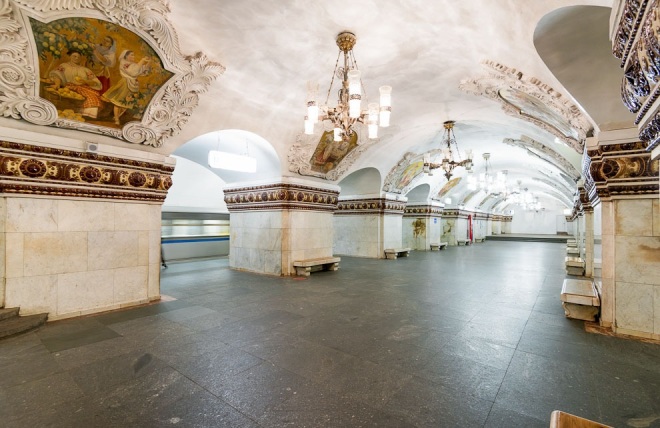 Kiyevskaya (dark blue), view on the train from hall 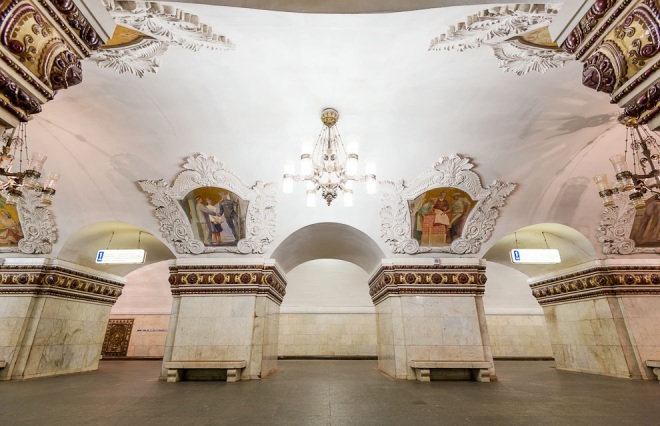 Kiyevskaya (dark blue), view on the edge of platform 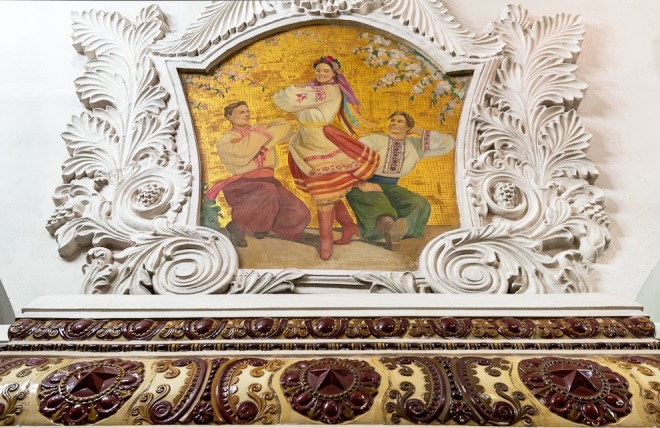 Opened in 1952 year. Name after the eponymous street. The most striking design elements of the station are the 32 spectacularly illuminated stained glass. The whimsical combination of multi-colored glass forms a sort of fantastic flowers, plants, stars. Inside stained-glass windows in the upper part are inserted small medallions that depict genre scenes of perfect peace. Six of them depict people (architect, geographer, artist, energy, musician and agronomist), and the rest – geometric patterns and five-pointed stars. 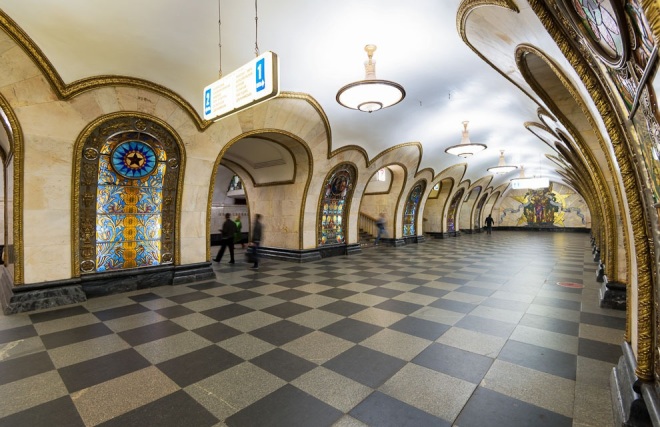 Novoslobodskaya , hall with view on the platform 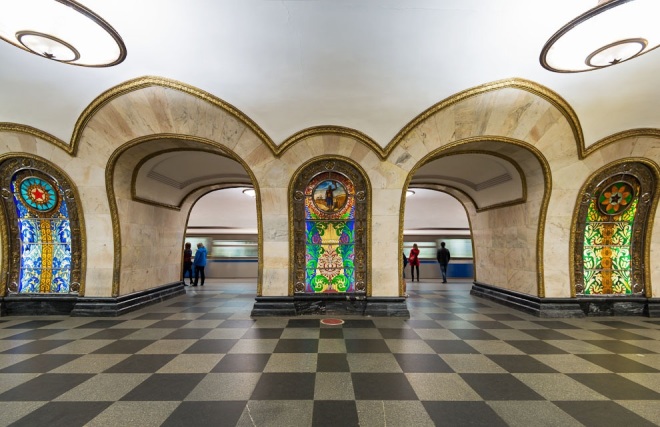 Novoslobodskaya, one of frescoes 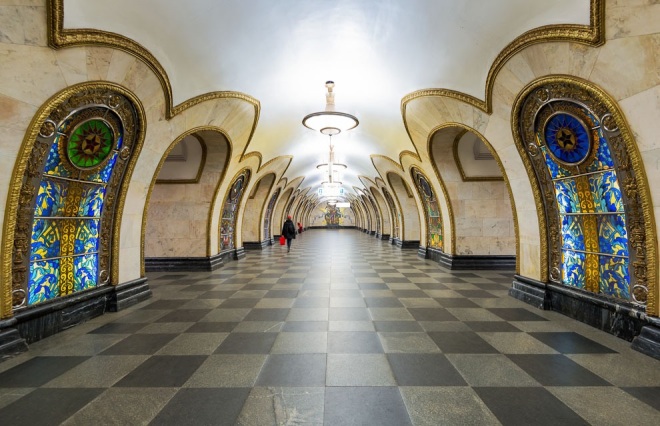 Opened in 1952 year. Named after Belorysskiy train terminal which is located nearby. In total there are 12 mosaic panels depicting the life of the Belarusian people.You can reach Sheremetevo airport by Aeroexpress from this station. 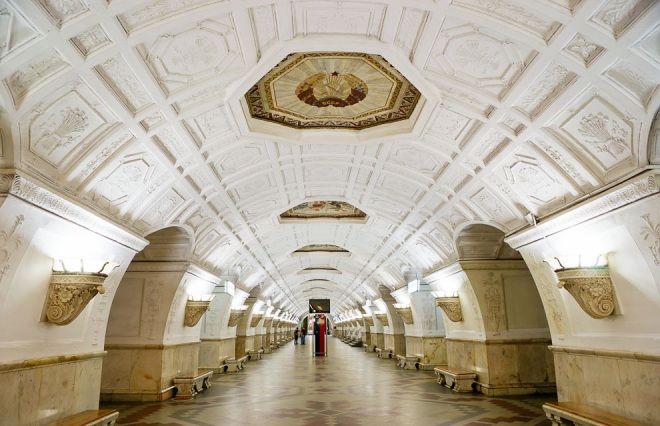 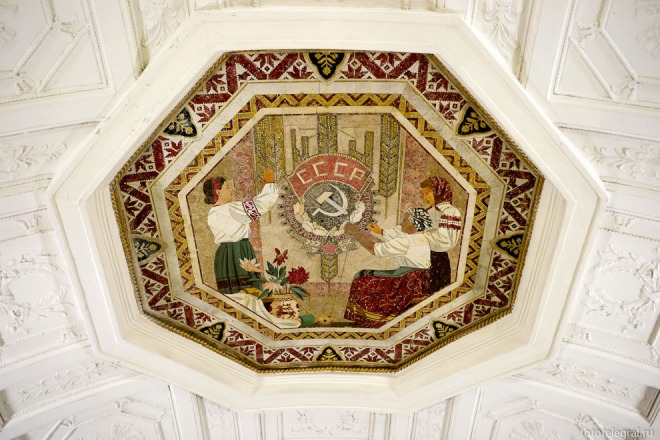 Opened in 1952 year. Named after Komsomolskaya square which is located on the surface. Architecturally the station “Komsomolskaya” is the apotheosis of Stalin’s Empire style, characterized by grandeur, pomp, a combination of elements of classicism, empire and Moscow baroque. Considering the location at the three train terminals, the station was conceived as one of the busiest transport hubs in the city, and as a kind of gate into Moscow. Station’s design is  devoted to the theme of struggle of the Russian people for independence. The ceiling is decorated with eight stations mosaics of glazes and precious stones. Six of them portray Alexander Nevsky, Dmitry Donskoy, Kuzma Minin and Dmitry Pozharsky, Alexander Suvorov, Mikhail Kutuzov, the Soviet soldiers and officers at the walls of the Reichstag. Two images Stalin, which then were replaced with the image of Lenin. 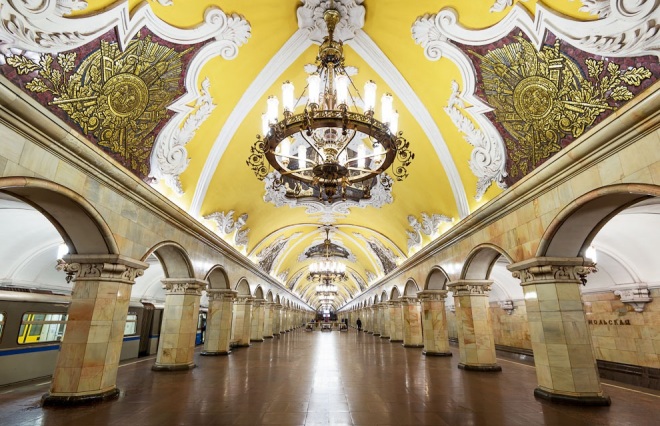 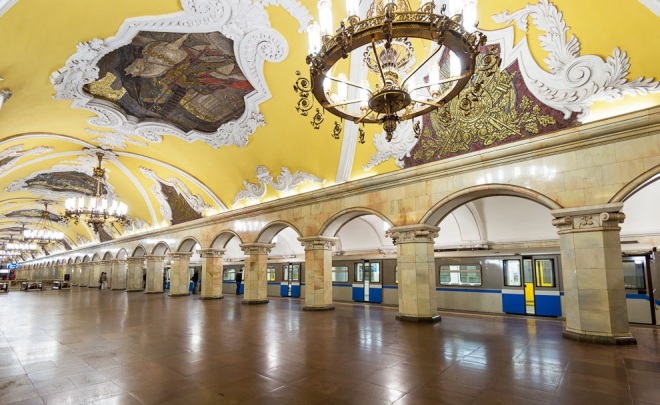 Komsomolskaya, view on train from hall 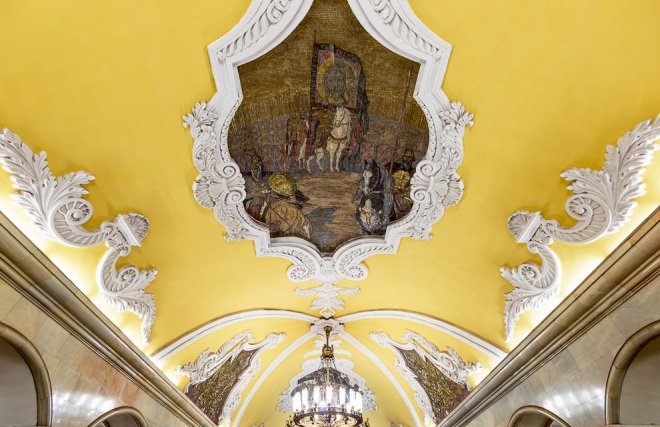 Komsomolskaya, fresco on the ceiling

Opened in 1938 year. Named after eponymous square. The main design element is 76 bronze figures depicting the Soviet people. In 1941 sculptures from the station “Revolution Square” were evacuated to Central Asia and were returned in 1944 During the evacuation, they were heavily damaged and there were only scattered pieces from them. However, due to the fact that each sculpture was repeated four times, all the sculptures were fully restored. They are arranged in chronological order from the events of October 1917 to December 1937. There are some famous sculptures on the station which are being rubbed for luck. They are nose of a border dog, rooster, flag of s signalman and revolver of a salor. The most famous lucky sculpture is a border dog. All this parts of luck sculptures can be simply fond as they are much lighter. This tradition arises to students that robbed sculptures for luck before Exams.

All figures (except for figures of pioneers) in order to fit in a limited amount of vaulted archways, depicted on knees, bent or sitting. In this regard, they said that the statue represents the image of the Soviet people – “it’s all or sitting (in the way of being prisoned), or kneeling.” 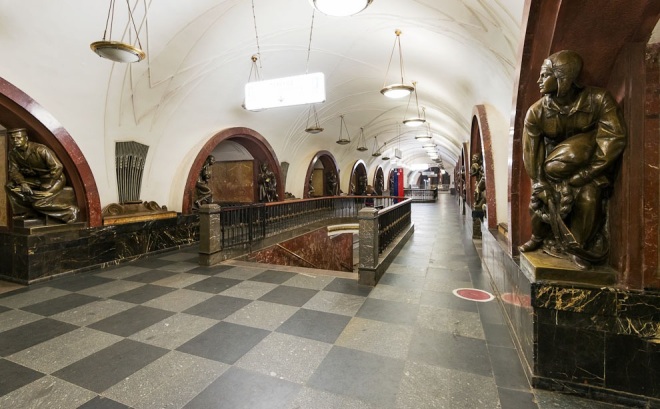 Ploshchad Revolyutsii, hall, in the center transfer stairs to another station 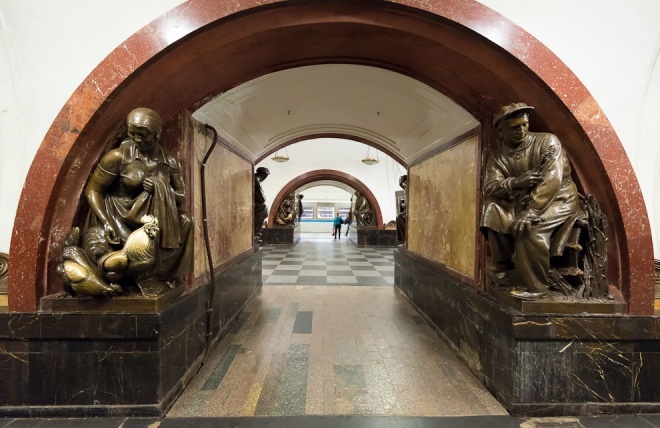 Ploshchad Revolyutsii, view on the station from edge of platform 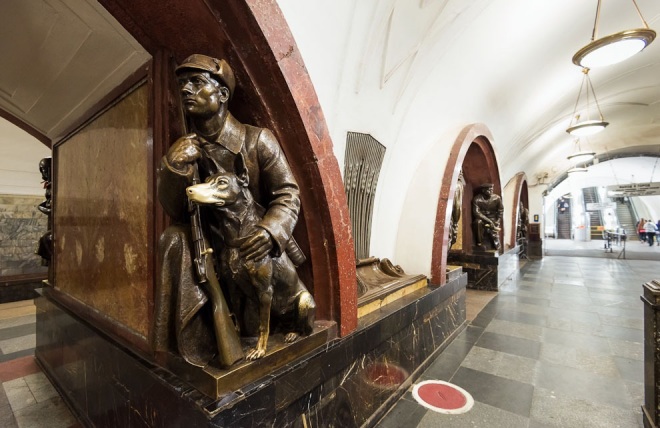 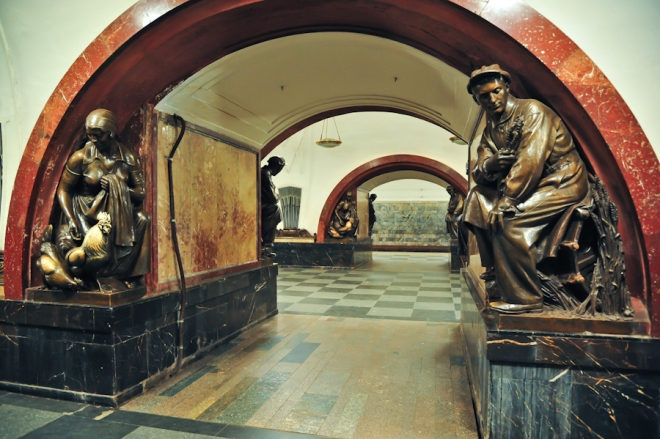 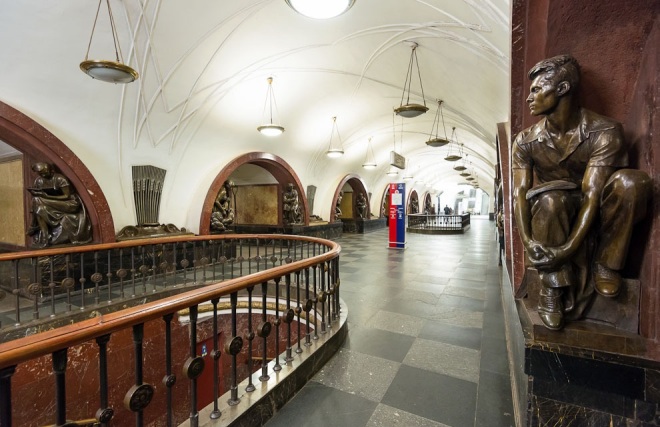 Opened in 1938 year. Named after a famous soviet poet – Vladimir Mayakovskiy. Ark of the station is decorated with mosaics made from sketches by painter Alexander Deineka. In 1939, the design of the station received the Grand Prix at the World Fair in New York. During WWII the station was used as a bomb shelter. November 6, 1941 on “Mayakovskaya” was a  meeting of the Moscow Soviet of Workers’ Deputies with the Moscow party people and public organizations. This day was a speech made by Joseph Stalin, who came to “Mayakovskaya” by train from the station “Belorusskaya”. The decoration of the station is placed in the ceiling niche with mosaics of glazes on theme “Day of Soviet sky.” The bad news is that to see them, it is necessary to lift up your head. 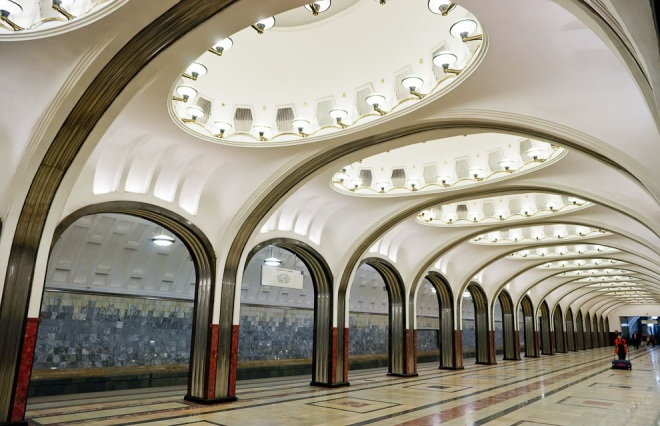 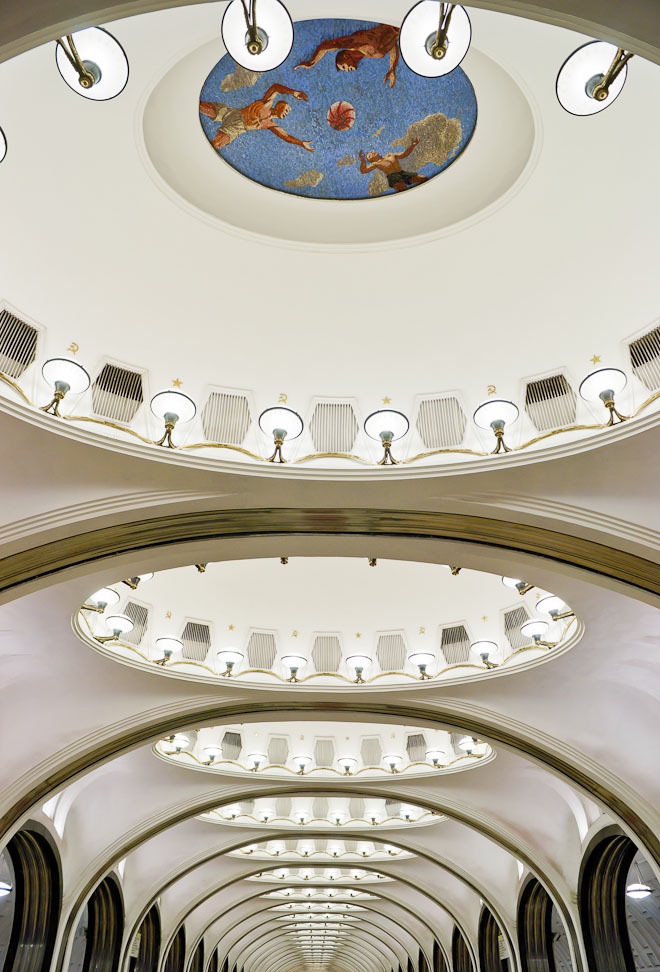 Mayakovskaya, Niches on the ceiling 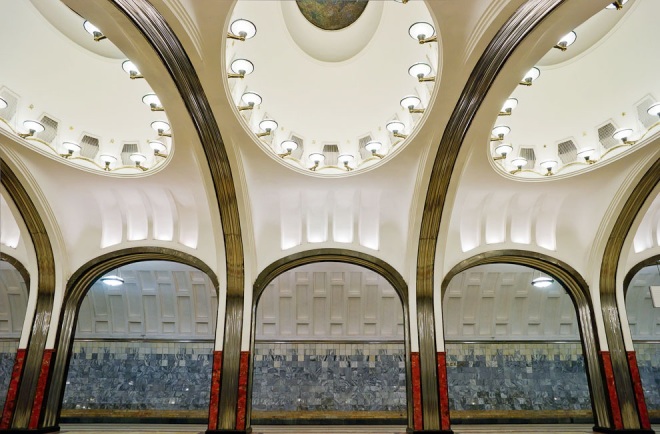 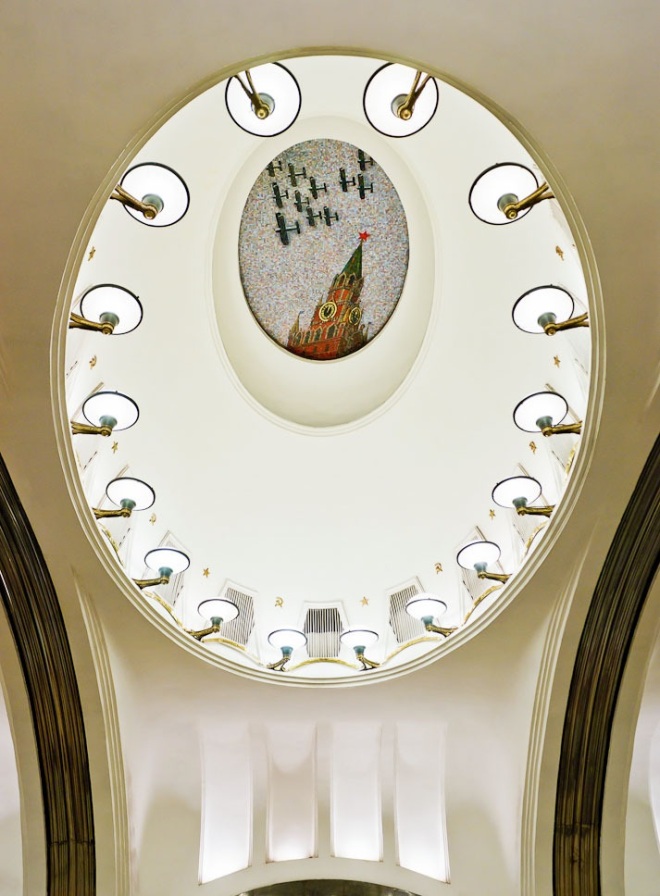 Mayakovskaya, fresco on the ceiling

Opened in 1959 year, reopened in 2002 year. It’s really unique station in Moscow metro as it is placed on a bridge over Moscow river. Station has panoramic windows so there is a great view on area around the station. Station was closed for a long time because of destruction of supporting structures but then it was reconstructed and opened again. From this station you can reach a very beautiful par which resides along the river bank. 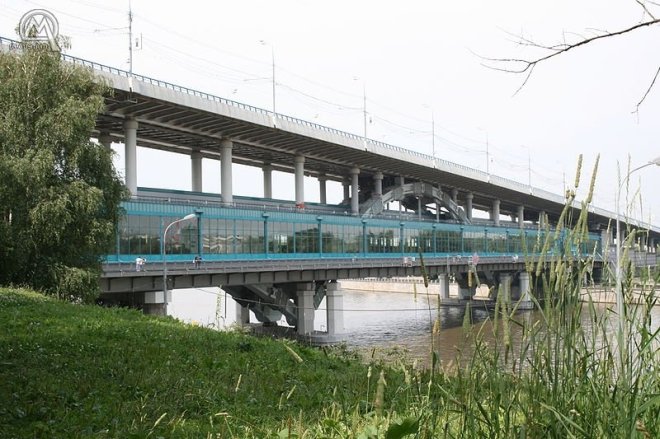 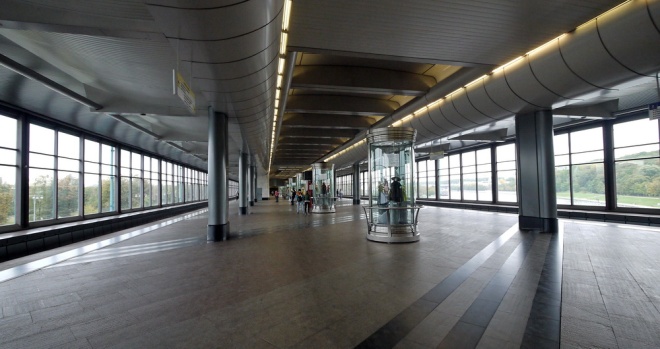 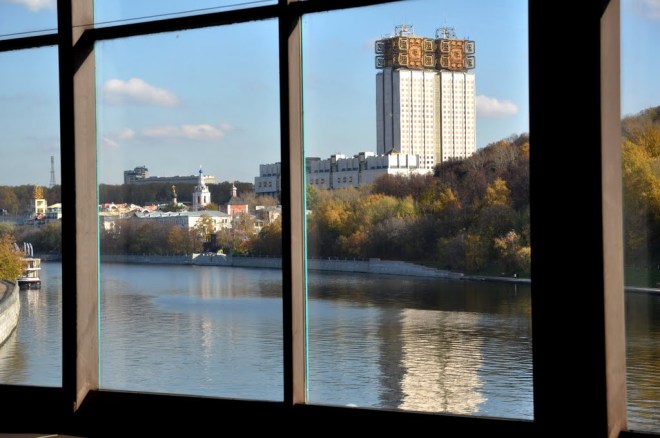 View from Vorobyovy Gory station. On the right is park, the tall building is Russian of Academy of Sciences